The last time I wrote I was waiting ardently for the sun to show after returning from her long December hiatus. I am please to say that more recent days have been clear, sunny and relatively mild for this time of the year with the thermometer hovering around -15 degrees. The hours of daylight increase significantly each day by as much as 10 to 12 minutes so a month’s time has made a huge difference and it can be felt both physically and psychologically. Less sleep is needed, appetite decreases and people sure seem to be smiling more when I pass them in the street or see them at the grocery store (maybe because I am smiling more as well).

My friend and temporary roommate Hart, who I introduced briefly in my last letter, finally made his way to Tuktoyaktuk where he had a good few days visiting with Sr. Fay. His troubles were not over however as he continued to battle rough weather on the way home and finally, south of Eagle Plains on the Dempster Highway, he developed some serious car trouble due to the cold temperatures. Paradoxically his car overheated when the radiator fluid froze in minus 40 temperatures. With no heat in the car and having to stop every two kilometres to let the engine cool down, he limped to Dawson City over the next 12 hours where he finally managed to get the vehicle repaired. Now, able to rest, he discovered that he had severely frostbitten his hands during of the ordeal. When I next heard from him Hart was in Whitehorse getting specialized medical treatment so he wouldn’t lose any fingers, a reminder to all that winter driving in the north can be a dangerous endeavour and you can’t be too prepared. The last I heard Hart was down south again heading towards his home in Ontario and healing well. It was a trip that he won’t soon forget and will give him plenty of stories for the years to come. 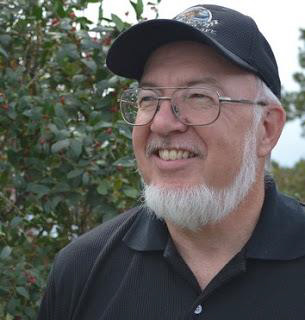 Two very important parish events took place during the past month. First, Gerri Fletcher, Religious Education coordinator for the diocese, and Roger Plouffe, pastoral leader in Fort Good Hope, came to Inuvik to offer the second of our annual Lay Formation workshops. This time the theme was on the bible and sacred scripture. We had a great turn out with nearly a dozen zealous learners from Inuvik, Tsiigehtchic and Tuktoyaktuk taking part. Roger spent time talking about biblical history, liturgy, translations. interpretation and many other fascinating topics. The input was great but perhaps even better were the conversations that were sparked and the sharing that took place among the participants. We are already looking forward to the next gathering.

The second event and a real highlight of the month was our parish mission which began at the end of January and is concluding as I write this letter. Our mission preacher is Dr. Megan McKenna a scripture scholar, author and story teller from New Mexico. Megan is a friend of the Redemptorists and our Provincial, Fr. Mark Miller, invited her to come to Canada and preach in our parishes with Inuvik being her first stop. Megan has a passion for sharing the Good News and people first become aware of her familiarity with the scriptures when she proclaims the Gospel without a word of text in front of her.

The theme for the first night of the mission was baptism and Megan shared with the small, but enthusiastic, group the Gospel from Mark about Jesus’ own baptism. She talked about how, when God spoke, he revealed how delighted he was in Jesus. Megan asked us to place ourselves in the story and to hear God saying how delighted he is in us and to know that the purpose of our being is to be God’s delight. Do we really experience the joy that we are called to at the baptismal font of living water?

The second evening brought out even more people than the last as word was getting around. Our theme for the evening was “Who is Jesus?” Megan asked us think about who Jesus was to us and how that image of Jesus has, or at least should have, changed through the years as we grew in faith. In the call of the disciples from Mark’s gospel we find that those who Jesus approached each had their own idea of who it was they were talking to as they listened and watched. Some called Jesus rabbi (teacher) others called him Messiah, the long await one foretold by the prophets. Jesus refers to himself as, “The Son of Man”, a title that we don’t normally think of when we think about the Son of God. Megan helped us to realize that Jesus saw his mission as one of bringing justice and compassion to the oppressed and that those who followed him were going to be challenged, as never before, to care for their neighbour and for the vulnerable ones who could not care for themselves. 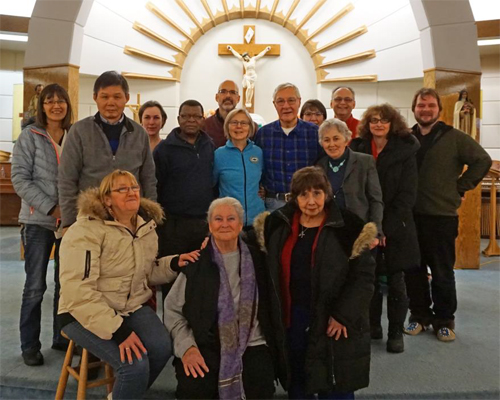 The last night was about forgiveness and reconciliation. We took pause to look at our shadow side, which everybody has. Through stories we learned that our shadow was there as a reminder of past wrongs we have committed or have experienced, but it was not without hope. The shadow of the cross falls over us and erases our shadow, setting us free. But God’s forgiveness is not cheap grace. It comes with the cost of the hard work of forgiving others as God has forgiven us. The parable of the lost sheep, in which the shepherd leaves 99 good sheep in the field to go in search of the one who went astray, was used as an example of Christian community and how we must never be apathetic towards those who have left the fold. Perhaps they have done so despite our best efforts but more likely they have left because of our lack of care and support. It was certainly food for thought and a challenge to live what we say we believe.

During the week in Inuvik Megan also took the time to share her wonderful repertoire of tales with the young children at the day care and elders from the Long-term-care home. Now, we are waiting for the plows to clear the road to Tuktoyaktuk so that we can drive up and share the mission once again with the faith community there. It has really been a gift and an experience the community will reflect upon and remember for a long time.